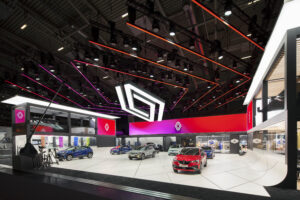 With no less than ten projects for well-known companies in the automotive industry, Raumtechnik Messebau & Event Services GmbH got off to a successful start in the fall season of 2021.
The company, a leader in 3-D marketing, made an impressive return to the trade fair scene after a long break caused by Corona.

Floating buildings!
On a covered exhibition area of several thousand square meters indoors and outdoors, the company showed an exceptionally broad spectrum of trade fair construction services.
Highlights of the performance were the projects in the newly created “Open Space” of the event, which this year was hosted for the first time in the Bavarian capital.
Thus the fair professionals from South Germany mastered all challenges of the realization of an approximately 300 square meter large, floating(!) exhibition booth for the brand Dacia, which was placed in the middle on the Munich fair lake.
But it was not only on the water that flexibility and extreme dedication were required; the other projects in the city area were also a logistical masterpiece in the open air, in addition to the requirement for climate neutrality and the changing weather conditions. At the so-called “Summit”, which was a traditional trade fair held in the Munich halls, the team from Ostfildern also provided impressive proof of its usual planning and implementation skills with impressive stand constructions for exhibitors Renault, Webasto, Mahle, Elring Klinger and IBM.

A successful start to the future.
All in all, the newly designed event was a complete success. Contrary to the concerns circulating in the run-up to the event, the organizer was able to announce a thoroughly positive outcome, evidenced by 400,000 participants from 95 countries, 744 exhibitors and an international media reach of 137 billion.

The Raumtechnik team is looking forward to the successful restart as well as to the already announced follow-up event in September 2023.